It’s been a rough growing season.  We’ve had weeks of lows in the 30s alternating with weeks of highs in the 90s.  When it wasn’t very cold or very hot, it was pouring rain.  We got seeds in the ground on Mother’s Day, but then didn’t really get back to do any work – or assess the damage – until the beginning of June, when we did a bit of half-hearted weeding after the half.

We started seeds in February under a grow light: two kinds of tomatoes, peppers, brussels sprouts, and broccoli. All but four of those plants died under the grow light or once the weather calmed down enough to transplant them into larger pots outside. The same thing happened last year, except that we had a 100% fatality rate. What a waste of time and energy. Fortunately Shane’s friend Julian gave us some hand-me-downs, which you can see flourishing in the north-east corner of the plot:

Honestly, the garden’s in better shape than I expected. The peas are starting to climb the trellis, and I picked the first zucchini (with 2-3 more growing on the vine) on Monday. The tomatillos already smell like salsa, and I think it’s actually impossible to kill off the broccoli and sprouts – transplants from the farmers’ market.

One wise decision that we made going into this year was to ditch the west bed, where we tried to grow onions and potatoes last year. It looked promising early in the season, but by May, it’s totally overshadowed by tall trees. Rather than try to fight it, we just left it alone and have used it for storing our extra hay bale and whatever waste we can’t be bothered to deal with.

This benign neglect actually worked in our favor, as when I visited the garden this week, I discovered a bunch of wild onions growing in that bed! Maybe they’re not ‘wild’, but I certainly didn’t put them there.

The photo may not look like much, but this pile represents an entire grocery sack full of wee onions, many smaller in diameter than a pencil. We clearly weren’t going to eat them all, so I turned to our the trusty Well Preserved for recommendations and wound up using their recipe for preserving wild leeks and ramps.

As with the sour cherry jam, this project was a lot of work for a relatively small yield: just three pints of pickles after at least an hour of trimming and scrubbing the tiniest onions ever. I bet they’ll be delicious, though, and I can’t wait to pop open a jar with a snack dinner in the future.

Because seriously, I’ve been sick almost three weeks.  I’ve been on medication since Saturday and am feeling dramatically better, but until I’m done with these stupid metal-mouth meds, I’m still sick. 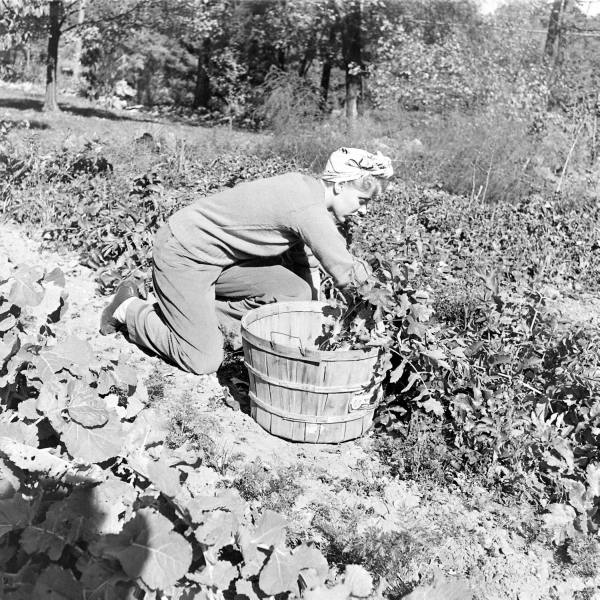 Despite still being under the weather, I spent a very happy hour in the garden yesterday.  I raked the compost into beds and lined the walkways with hay in hopes of preventing at least some of the weeds from creeping into the good soil.  Shane got me a nice gridded notebook for our anniversary, so I’m looking forward to planning the beds this week and getting seeds in the ground by the weekend!  What are you growing this year?

Do you see them?  The snow finally melted away from the front bed, letting the first sprouts from the herb garden soak up some much needed sunshine.  I spotted them yesterday when I headed out for my run – a bit of parsley, a few leafy stems of oregano, and the fragrant lavender, which with any luck will bloom this year.

Spring is almost here – can you believe it? The high was in the mid-50s yesterday, and will be in the mid-60s today. We’ve renewed our Project Grow plot, and I started seeds under the grow light last weekend: Brussels sprouts and broccoli, cucumbers, and a few kinds of tomatoes. We’re planning for truckloads of compost, and I’m looking forward to many afternoons blissing out in the sunshine and dirt.

For now, though, I’ll just enjoy seeing our photos featured on the site for our community garden – and dreaming of the long spring and summer to come.

I’ve got to warn you on this one: this recipe will make your house smell weird.  And, if you have a small kitchen and it’s a cold day, it’ll continue to smell weird for the rest of the day.  It was all worth it for three reasons.

First, we got rid of some of our damned banana peppers.  I intended to grow a few hot peppers this summer, but in the hubbub at the farmers’ market, I think a few plants were mislabeled as I ended up with about six banana peppers, two bell peppers, and one other pepper plant of a hotter variety.  As is the way of these things, the banana peppers were the most prolific plants in the garden – second only to the tiny cherry tomatoes – maybe Sweet 100s – that showed up on their own.  No joke, we’ve picked at least 15 pounds of banana peppers this summer.

Second, few things warm up the house more efficiently than four pots of boiling water: one for processing the jars, one for heating up the lids, one for making the jelly, and one for the tomato sauce I made with a few pounds of green tomatoes that ripened when I wasn’t looking.  I’m pretty sure this is a more efficient way to heat the house than our actual heater, in fact.

Third, we now have six half-pints and one pint of spicy-sweet pepper jelly to spread on toast or to use as a marinade or – well, I’m not sure what else we’ll do with it. I just know it’s tasty.

Recipe:
Hot Pepper Jelly adapted from Simply Loving Home, part of October’s Can Jam.  My only real modification was using banana peppers instead of jalapeños.

I could tell you about the horribly disappointing dinner I made tonight while Shane was off at a moped thing in Toledo.  It involved my first attempt at using a fresh ham steak, and resulted in me eating a giant bowl of green beans for dinner.  How’s that for pathetic?  The green beans were good, though, and later in the evening I pumped up the tires on Orange and biked up to Swirlberry for frozen yogurt – my first bike ride since the fall.

What I will tell you about, however, is the garden.

It is SO exciting, you guys! We have the following planted: cucumbers, beets, rapini, chili peppers, bell peppers, curly kale, carrots, French breakfast radishes, zinnias, nasturtiums, yellow squash, sunflowers, onions, Red Norland potatoes, Yukon Gold potatoes, and several kinds of tomatoes. I’d tell you which kinds, but the little tags fell out of the plants somewhere between the farmers’ market and the garden. It’ll be a big surprise.

Seriously, I can’t tell you how happy working in the garden has made me. We made all kinds of novice mistakes, and will probably make many more before the season is over. Our red potatoes are failing to thrive because they’re getting a lot more shade than I expected. All but one of the plants that I started in the basement died when I set them out to harden off. We have some pretty virulent weeds. But you know what? Every time I walk over to the garden, I come home beaming.

Mark and Melissa have been taking videos of their garden and encouraged me to do the same, so here’s a 3 minute video tour I took tonight:

Our garden has started to yield all kinds of lovely things – smallish beets and kale thinnings, a couple of potatoes, and lots of French breakfast radishes – and yesterday I spotted the first couple of tomatoes ripening on the vine.  Somewhere I wrote down everything that we’re growing, but I keep planting more things each time I’m there, so I’m not sure how reliable those notes are anyway.  That’s not the point, though – the point is that we are growing food! In our garden!

I had a simple and really lovely lunch today – a small yellow 2nds tomato from the market and a few spicy radishes from our garden, all sliced thin and drizzled with a feta dressing and a sprinkle of sea salt.  A couple of slices of toast.  The last of the cold brew coffee.  And then I read my book and took a nap, and it was good.

Our new place has no outdoor space – not even a balcony for our little garden – so about half of our plants went to Mark’s house, and the surviving herbs were transplanted and are living in our kitchen window.  The cats have helped themselves to the chives, but otherwise everything seems to be thriving.

Someone in the complex, however, covertly stashed their basil in boxes by one of the flower beds.  I noticed it on my way to work one morning, and have subsequently checked on it regularly, pinching off any flowers or buds to keep it growing.

Yesterday, though, I noticed that the basil is gone.  I hope that the sneaky farmers retrieved their plants and that they weren’t just tossed by the maintenance people.  That’d be a sad end for two bins of lovely fragant basil.

It’s been raining since Wednesday, with few interruptions. My poor garden is taking a beating, but I think it’ll survive. Another red, ripe strawberry is waiting for me to brave the rain to retrieve it.

One week off from coursework, and then I start my two summer classes: Qualitative and Quantitative Methods, both taken at GW. I should also be starting my thesis research, but I’m giving myself a few more weeks before tackling that beast.

Today we slept in and skipped church, instead running errands and making brunch for friends out of mostly-local ingredients. I feel a little ick now, but for the most part I’ve been feeling way better with less food guilt (physically and otherwise).

Many congrats to my GSLIS friends who graduated today! I meant to tune in to virtual graduation, but we got busy with brunch and forgot. My apologies.

On Wednesday I fly to Chicago for four days for a meeting. I’m hoping to catch up with Keem and El while I’m there. Too many friends, not enough time, as always.